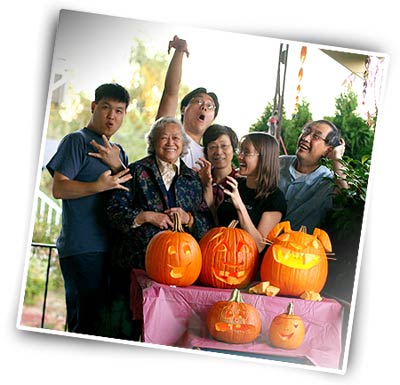 David and I went to Po Po’s house with my mom, dad, and brother-in-law to carve pumpkins. It was lots of fun sitting out on the porch, designing and crafting our masterpieces. Po Po said we all should open an art studio. I don’t know about that, but it was neat to see what each person came up with.

I liked how Dad left some dark pumpkin skin in the crack between two teeth he was carving. He also carved the Chinese symbol for ghost on the back. It was nice to see Po Po participate some with Mom’s little pumpkin. Mom wanted to do more after she finished her first pumpkin face, so she did a scarier face on the back side. When she held the pumpkin up, the sunlight through the top made it glow inside. Pretty neat. Since she was done early, she sorted out the seeds from the slimey guts her style – with chopsticks. 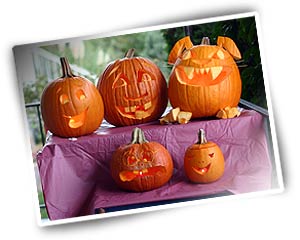 Jack’s pumpkin was just cute and happy. He named it Chuck. David’s cat pumpkin was precision cut, with the ears that came from the cut-out piece of the mouth. We named it “Fangs”.

Mine is in loving tribute to my husband. It’s supposed to be a geek with masking-taped glasses. Jack and David helped me come up with several names. I liked Chucky and Harry, but I think I’ll settle with Norman.

We continued our party at the Gold Coin Chinese restaurant. When I got out of the car, there was a Wendy’s to-go bag on the curb. I picked it up with the intention of throwing it in the trash, but inside was a kid’s meal toy—still in it’s plastic bag. It was a stuffed Charlie Brown doll. Cool! All throughout dinner we talked about the Charlie Brown characters, and reminisced about the Great Pumpkin and Garfield Halloween television specials.

All that talk of the halloween television specials inspired us to look for Jack and David’s old VHS recording of the shows in their basement. It didn’t take long before we found them, thanks to Jack’s incredible memory! Jack kept laughing at my impression of Garfield’s greedy banter “Candy-candycandycandy..” all the way back up the stairs. All my anticipation was worth it because not only did Garfield and Odie dress up as pirates, but Jack quoted practically the whole Garfield show – songs and all!

It’s The Great Pumpkin, Charlie Brown was a little less silly… actually a little more of a downer as Charlie only got rocks in his sack while the others got candy when trick-or-treating. His ghost costume that had too many holes because of his troubles with the scissors was cute, though.

As we left we agreed that it would be fun to continue the tradition of pumpkin carving with family for the years ahead, as we kept discussing plans of what we would make next time. We waved to Mom, Dad and Jack, Dad’s new Jack-o-lantern on the porch, and the glowing plastic jack-o-lantern candy bucket Dad covered the porch light with, and headed home with merry hearts.

See all the pictures from the party »