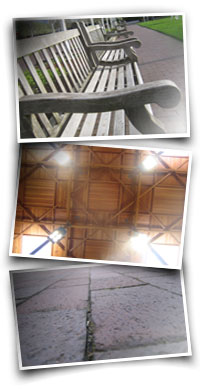 One of the fun things to inspire creativity is to come up with a theme for routine tasks. I’ve read from a variety of sources that photographers spice things up by setting up a theme on a photo hunt. I believe there are times for freeform and exploration, but a theme can give a purpose rather than aimless shooting.

The weather was fairly nice in Beaverton in the afternoon, so Jenni and I took a light stroll near the Beaverton library with cameras in hand. While she was getting better acquainted with my digital rebel, I took the opportunity to photograph some patterns around me.

For the pictures on the right, I tried out a new technique of making them look like real photographs laying on a white surface. I came across a fun tutorial which described the process in Macromedia Fireworks, but I was able to adapt it to Photoshop CS2 easily. Here were my steps if you’re interested in reproducing the “look” of a real photograph.

What I enjoy with the effect is that I don’t have to put in a solid line border around the picture like I use to. The shadows give the implied lines look. It’s softer and subtle.