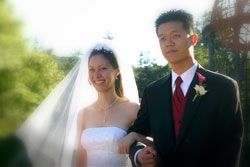 Jenni, Jack, and I visited Los Angeles this last weekend for my cousin’s wedding. Kevin, Jack, and I spent a good portion growing up learning multiplication from our grandpa, talking about who’s getting which Transformer robot, and blowing crap up with firecrackers that we got from our dentist. He moved away from Oregon before I started middle school, but our mischievous adventures of many years will always be a part of me. It was a huge blessing to be a part of a major milestone in his life. 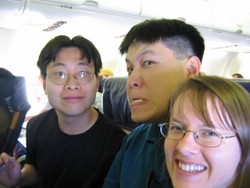 Just two days after my brother Jack moved back to Portland from Pittsburgh, we caught a flight together to Los Angeles. I had originally thought it was a direct flight, but we made a stop at San Jose before landing in the Los Angeles airport. The airline stewardess was only slightly funny, not quite the wit we got on our flight to Reno.

We got into town on Thursday so we could dance with Californian west coast swing dancers at the Hacienda. I had bragged about that dance venue to my friends for a while. It had no door charge, three separate dance floor sections, great music, and awesome dancers to dance with. I visited the Hacienda for the second time in April during a business trip. My coworkers were surprised when I told them that I was going out dancing after standing at a booth for the whole day. I couldn’t pass up the opportunity to dance at the Hacienda. 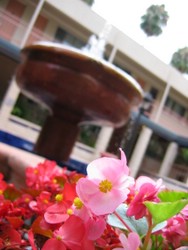 So naturally, with expectations that high, I was let down slightly. There was a dance convention in Palm Springs the same weekend as Kevin’s wedding so I was told that many of the dancers were gone. Still, we enjoyed mingling with the people there and got in some fun dances.

The next day, we had a two-and-a-half hour experience with Hertz. I hadn’t made car rental reservations because I had hoped to rent a car from the Hacienda hotel, but they ran out. So we took a shuttle trip back to the LAX airport’s Hertz. We waited in line for probably twenty minutes to find out that I needed to make a reservation online or by phone before I reached one of their representatives. Thankfully, the female representative was kind and helped us get a car without a reservation. All the waiting paid off. When we got all our stuff in the car and drove up to the security check, the officer told us to go back to the customer service desk because our tags had expired.

After a short visit to the customer service desk, we got the problem fixed by getting a new car. Or so we thought. When the golf cart took us to the spot where our new car was suppose to be, the car was missing. Another trip to the outside service station finally got us a car. The second time through the security check was smooth sailing.

We got four blocks away when I realized I had left my sunglasses in the first car. Not to lose my cheap sunglasses because I hate losing things, we drove back to Hertz. Jack was a sport to run through the lot for my sunglasses. After all that ruckus, we headed to the Santa Monica Pier for some beach time. 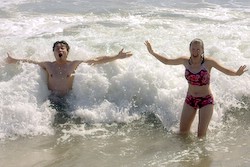 Jack and Jenni played in the ocean for a bit while I captured photos of them. I got wet a few times when the tide came in too far. The waves were pretty tall and strong. There were a lot of people on the beach and the water was warm. Some people were boogie-boarding and had a blast riding the waves in.

We got to our second hotel of the trip for a quick clean-up before heading off to the rehearsal dinner. I was surprised we were invited, since we weren’t part of the wedding party. Still, it was great getting to meet Kevin and Josselyn’s wedding party. And also more to talk to the

The restaurant was very elegant, up on a hill with a view of the city. We got there near sunset so the city lights were beginning to sparkle at a distance. Complimenting the great scenery was the exquisitive food. We were seated with the late people since I had underestimated how long it took to drive twenty miles through rush hour traffic. Nevertheless, we weren’t the only people at the late table.

One of Kevin’s groomsmen, Simon, was at our table and we got to talk to him for a bit. During the dinner, I looked up at him only to see a giant spider crawl up the left side of his shirt and under his collar. I couldn’t decide what to do, since I didn’t know him as well. So, I waited until he stopped talking to another person at our table until I spoke up. He quickly got out of his seat and I saw it sprawling down his shirt. As he shook himself around, it fell down to his leg and continued onto the ground. A waiter came by and squashed the little bugger. Simon complimented me afterwards on how calm I was throughout the whole scenario. He just didn’t know I had previous spider-killing experience. 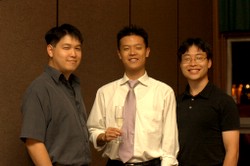 Getting us three all together has been tougher over the years, with Kevin going to school in California, Jack at Pittsburgh, and I staying close to home in Corvallis. It was great getting the three of us together a year ago at my wedding, so we always get a picture together when the opportunity is present. Now, two of the three are married. Jack is happy to be the “Last Man Standing.”

The next day, we ran a few errands before Kevin and Josselyn’s wedding ceremony. First and foremost, we had to go to In-N-Out Burger. I have heard about them over and over again about how great their food is. So, with some trusty wireless internet at our hotel, we did a Google local search and found one less than a mile north of us. 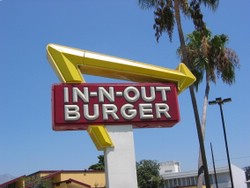 There was quite a line for the drive-through. I guess we hit the place around lunch time. They had a gal outside walking car to car taking orders, which was much better than talking to a muffled speaker. I didn’t order anything special, just a burger and fries. I guess another highlight is their prices, and they were pretty low for the amount of food given. The food wasn’t that earth-shattering as I was hyped to believe. More like deliciously greasy. I’m sure my arteries loved me for that.

Kevin and Josselyn’s wedding ceremony was at the Descanso Gardens. It was a very elegant outdoor garden with lots of flowers, archways, and fountains. Jenni even found a small waterfall tucked away. I’m thankful he told me to come early so I could get a few photographs of the scenery.

Incidentally, the day was also my parents’ wedding anniverary! It’s been thirty four years for them, and in times where marriages aren’t held up, it’s great to know that they’re still together.

But the day was for Kevin and Josselyn. The harp player started the ceremony and people got seated. The hour had brought the sun fairly low, so many people used the fans on their seats to cover their face. The sunlight also made it difficult to photograph the ceremony, but Jack, Jenni, and I managed to get a few shots. I learned the value of a lens hood since many of my shots had stray light.

The ceremony was short and sweet. Their first kiss was quite a doozy with the crowd cheering them on. Following the ceremony was a flurry of group photographs before we all headed to a Chinese restaurant, Ocean Star, for the reception. 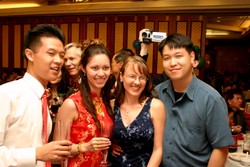 The reception was packed with people. I was happy to catch up with some of my distant cousins and enjoy being part of the crowd. The toasts were heart-warming, slideshow nostalgic, and food overwhelming. It all went by really quickly and the night was over.

The trip was a fun adventure. It was great travelling with Jack and Jenni together, they both can be quite goofy at times. We all watch out for each other and enjoy great conversations. I hope that in the future, we’ll all be able to hang out with Kevin and Josselyn.

See all the pictures from our trip »