It’s been an interesting few days with the high-speed winds blowing in the northwest. We experienced two blackouts in three days.

The first one was Thursday night, while Jack and I were out at a seminar about retrospective meetings. I got a call from Jenni that power was out at our place. After the talk, Jack and I picked up Jenni from our pitch-black apartment complex and headed toward Jenni’s favorite restaurant: Chipotle’s.

The second power blackout happened during our church’s Christmas party. The blackout was caused by a fire at a power station nearby. The party ended well in a worship to the Lord. We had a crew of people come to our place, despite having no power. Jack, Clark, and I got some guy time while Jenni and Mary got acquainted with a new friend Heidi, who Jenni used to babysit many years ago. The guys went hunting for ice to keep the contents of the refrigerator cold if the blackout were to last overnight. We tried Fred Meyers, then Target, then finally found ice at a gas station.

On our trip back home, we received a distress call from a new friend at our apartment, requesting for a caffeine liquid refreshment from a local coffee shop. So we drove back to Fred Meyers, where a Starbucks was located. After accomplishing our second goal, we returned back to the apartment where new plans were hatching to go to another friends’ place that had power.

We spent the evening taking some group shots then playing the card game, Scum (otherwise known as Presidents). While having no power can be a detriment to a computer geek, it was great to spend time with friends in candlelight. I almost look forward to another blackout if we always have as much fun as we have in the last two. Almost. 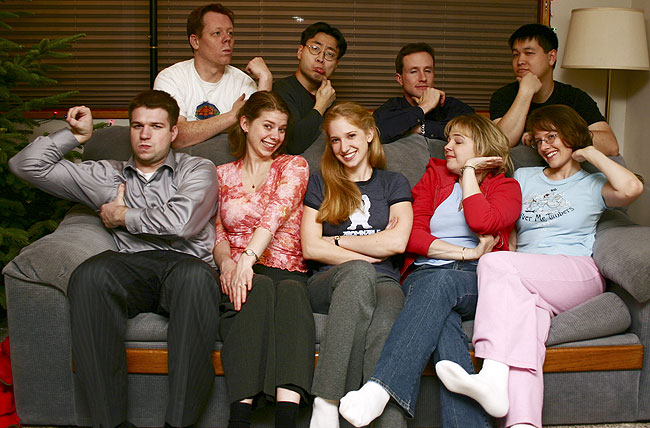