Leah, James, Jack, Jenni and I visited the OMSI exhibit of Star Wars to see the science of the space saga. There were many props on display from all six movies in the two triologies, including models, costumes, lightsabers, blasters, and vehicles. More after the jump into hyperspace! 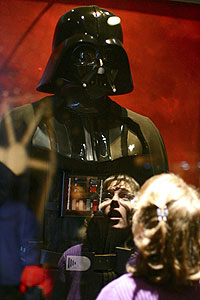 One the best parts was imagining what it would be like if I was a character in the movies. With the life-size models, I got a sense of scale to how much shorter I was beside Darth Vader. Most of the time, the glass cases protecting the exhibit made photography difficult, but in the instance to the right, having Jenni’s face be transparent was a neat effect.

We visited several of the exhibits where we learned how close science fiction was becoming science reality. In Star Wars, there were several battle vehicles that walked, either with four legs or on two. Alongside the Star Wars vehicles, they had robots that actually walked. There was a station to demonstrate why it was difficult to create a walking robot, and visitors got to learn about center of gravity.

They also had televisions that had looping videos describing various aspects of the effects. The sound engineers in Star Wars are to be commended in creating unique sounds for the space battles, races, creatures, and weapons. I’m amazed at their creativity and resourcefulness in finding sounds in unusual places.

We spent about two hours going through the exhibit and then spent another two hours in the regular OMSI displays. We had some fun in the physics room and playing with the infrared camera. Special thanks to the CEO of Vernier Software & Technology for allowing us to visit the OMSI Star Wars exhibit as a corporate member. Dave Vernier is on the board of OMSI, and there is a room at OMSI called “The Vernier Lab.”

More pictures to see, you have not »