Yesterday David took me to my second prenatal appointment. (That’s right! I’m pregnant, and over my first trimester at that!) We got to hear the baby’s heartbeat for the first time. I was so happy I cried. 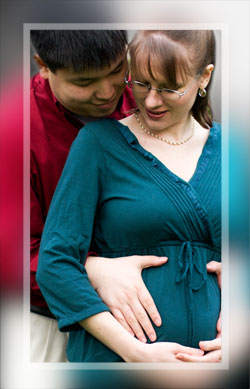 I think there are different stages of realizing one’s pregnancy. The first couple of weeks after we found out, it hardly felt real. Then I started feeling more and more nauseated, and I had to buy some new clothes. Towards the end of the third month, it was hard to think about anything except survival – feeling nauseated all day, figuring out what to eat that I can keep in my stomach, having to eat every two hours, even at night (due to my hypoglycemia), and the fatigue. But now I’m in the middle of my 13th week and I am feeling a lot better! I can make it through the night with having to eat only once instead of 5 times. And I can eat rice again without the gag reflex taking over. That opens up a lot more food options again!

I even went dancing last night. Talk about a weird experience! Now I know I’m not that big yet, but strutting down the line of dance and spinning felt far from normal. I felt like there was an extra blob in front trying to catch up with the rest of me but lagging behind. Margaret reminded me that I have such increased blood volume due to my pregnancy. There’s a lot more liquid in me to move around besides having things inside me shifted. I read that the blood volume is increased by 20%, and can reach up to 50% by the time the baby is ready to be born! We’ll see how much dancing I can do at Easter Swing in a few weeks.

Back to realizing pregnancy, it was nice to get to announce our news to David’s coworkers this week. We brought pie, and David made a nice card with our announcement. It was even nicer that so many of his coworkers were very happy for us, and funny that some of the more mischievous guys are planning to come up with names for us. I wonder if they’ll think of the same ones we have: Tim, Jim, Kim, Harry and Ana (on a).

After my appointment yesterday, I was eating lunch with David and I asked him what his thoughts were when he heard our baby’s heartbeat. He said I probably didn’t want to know. I told him I really did want to know, and he said that it made him think of Pac-Man!