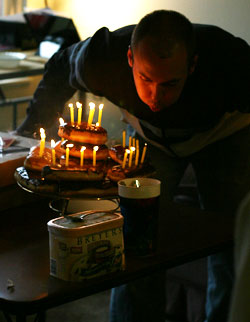 On Saturday, Jenni, Jack, and I lugged computers over to Clark’s house for some video gaming to celebrate Clark’s and my birthdays. January 20th was a good midpoint between our birthdays.

Several of Clark’s groomsmen were present and they played Rune while Jack, Jenni, and I played Marvel Ultimate Alliance. Later, Jenni and Mary played Battle for Middle Earth 2 while Jack and I joined in on Rune. The amount of mouse clicking was insane as we played Rune for an hour.

We played a big game of Battle for Middle Earth 2 with five human players against three computer players toward the end of the gaming party. The computer team didn’t pose much of a challenge the first game, but they almost took me out in our second game. Fortunately, everyone came to bail me out, I recovered from my loss, and we had a very satisfying victory.

Sunday, we went to church and quickly got back to our apartment for a big family gathering celebrating Travis’ birthday. We had 13 people in our small apartment. There was great food and lots of laughs, but the best laugh came during the group picture:

END_OF_DOCUMENT_TOKEN_TO_BE_REPLACED 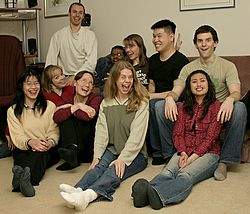 There’s nothing like watching dance videos to get inspired about dancing. So I couldn’t think of any better way to celebrate but to have a birthday party for my friends and I to watch Mary’s new US Open 2005 DVDs.

END_OF_DOCUMENT_TOKEN_TO_BE_REPLACED 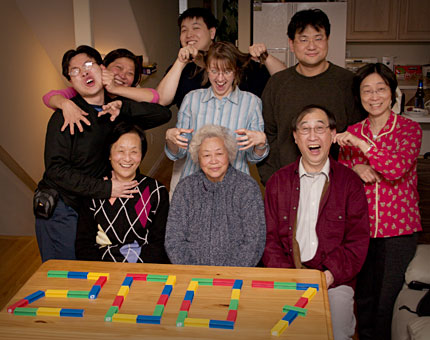 Jenni and I spent New Year’s day with family playing Uno Stacko at my mom’s cousin’s house. It was great playing all together and watching everyone’s expression as they tried not to make the tower fall over.

The new year has been going well so far for us, both of us caught a cold that’s been getting around my office, but we’re enjoying being sick together. It just means more movie time =)