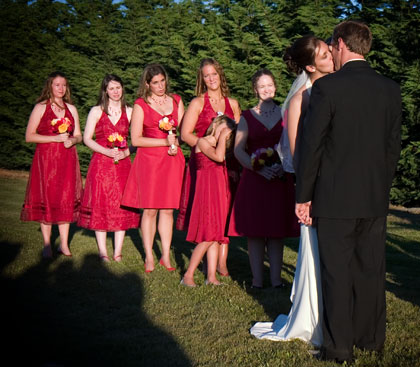 I first met Jenni’s brother Cory after he came back from swimming. It was my first time at Jenni’s parents’ Battle Ground home and I was waiting in the living room for Jennilyn when Cory came through the front door. He offered me a friendly introduction before heading off to clean up. Before Jenni and I headed off to the backyard, he came back out shirtless and I took notice how muscular he was. “Better not mess with Jennilyn,” I thought to myself.

As I courted Jenni, I got to know Cory quickly because he was an open and friendly fellow who was adventuresome, yet very grounded. He was comfortable with himself and his confidence was ever present, but never foreboding. Though we didn’t have much in common, he was always great to converse with.

Cory brought Arianne to our apartment shortly before the holidays in 2006 to hang out. We had a simple dinner together of potstickers as we tried to get to know the girl Cory was dating. She was shy and quiet, but very hospitable and helpful. After we finished our meal, we learned how to play a card game “Scum.” I’m glad we played “Scum” as we got to see a little bit more of Arianne’s playful personality.

From family gatherings thereafter, I admired how Arianne always jumped in to lend a helping hand. It is a quality I love about Jennilyn. Cory and Arianne worked side-by-side during family meals if there was preparations needed or clean up afterward.

Both Jennilyn and I were very fond of Arianne and hoped that she would be the one for Cory. We were so happy that we accompanied Cory when he picked out the engagement ring for Arianne.

Their wedding was beautiful outside Arianne’s parents house. Cory had built three arbors that framed the pathway in which Arianne would walk to him. They were decorated with roses with rose pedals sprinkled on both sides. Jenni and I had front-row seats to the ceremony and we got a chuckle as a neighbor lady poked her head through an opening in the bushes behind the wedding couple and snapped a picture. I wished I had gotten a picture of that.

I enjoyed that they did something different than an unity candle. I had never seen it before, but Jenni had. They had two bottles of sand in which they mixed together into a third bottle, symbolizing that they no longer are separate, but as one.

At the end of their reception, they drove off in a red mustang with fireworks blasting in the air and friends along the road with sparklers. Jenni and I wish them the best and look forward to getting to hang out in the future.

See pictures from their wedding »

2 replies on “Cory and Arianne”

What a beautiful wedding! As always, good job with the pictures David.

I have been looking for classmates from BGHS 1999 for our 10 year reunion! Please send me your info. Our class website is http://1999bghs.webs.com/missingclassmates.htm Check it out or return my email so I can remove you from the missing list!

Your wedding pictures are beautiful! You we’re a stunning bride! Congratulations!