Ever since watching Batman Begins, I’ve been eagerly awaiting its sequel because it was a movie so good, I didn’t want it to end. Now, matched against Batman’s most famous nemesis, the Joker, it’s a battle royale for Gotham. And Joker definitely got a smile on my face for his performance. Why so serious? Because this is one seriously dark movie.

I should state that I’m going to write spoilers below. If you haven’t seen the movie, you may want to come back to this after you’ve seen the movie. There are some great plot twists that should be enjoyed through the progression of the movie.

With that disclaimer aside, I have to give props to Chris Nolan and his crew. They know and understand how to deliver a story with rich metaphors that get picked up in repeated viewings. Sometimes I dream up things like “wouldn’t it be cool if they did…” and I get excited when it happens. In The Dark Knight, I was shaking in excitement because they did what I thought would be cool and took it up a notch. Often times a few notches.

I loved they named the movie “The Dark Knight” since it is one of Batman’s aliases and tied the theme throughout several story threads in the movie. I was pleasantly surprised that they played off the theme of knights as much as they did. Harvey Dent was the “white knight” of Gotham because he was a district attorney using the law to fight crime while Batman was the “dark knight” because he used means outside of the law. I thought it was a clever means to tie the two characters together in addition to the same love interest.

I don’t think they got to explore character of Two-Face as deep as they could, but the movie was getting pretty lengthy and the Joker stole the show. I still have to tip my hat to the writers who did Batman: The Animated Series, their treatment of Two-Face was the best.

Aaron Eckhart, who played Harvey Dent, did a good job and his character was well-integrated into the plot. He wasn’t just another villain tacked on like in previous Batman movies, but he didn’t get the time to become the tragedy he is in other interpretations. I would’ve liked to see more of Harvey Dent’s hidden dark side lash out before his face transfiguration. Perhaps I missed it, but there wasn’t much explanation in the movie as to why Harvey had the nickname “Two-Face,” which was alluded to later in the movie. 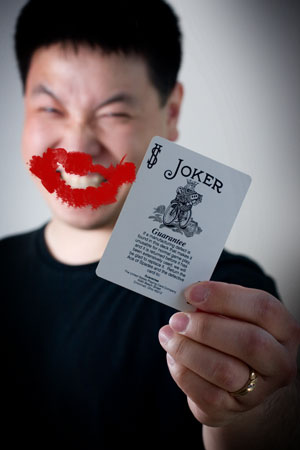 I was immensely sad to hear of Heath Ledger’s death. The first movie I saw him in was A Knight’s Tale and he did a respectable job. In 10 Things I Hate About You, I found his character likeable. In The Dark Knight, he has become the definitive Joker by which all future Jokers will be judged by.

Crazy. Unpredictable. Insane. Brilliant. Scary and deadly. Jenni didn’t come see The Dark Knight with me because he looked too scary from the trailers. And she was wrong. The Joker is more than scary. But scarier still is how well Heath Ledger portrayed the madman. From the moment he showed the audience his magic trick, any doubt of his incredible performance disappeared.

“When you stare into the abyss the abyss stares back at you.” ~ Nietsche

I remember reading an interview where Heath Ledger spoke about how he prepared for the part. He confined himself to solitude and I can only imagine what his thoughts went to become the Joker. When I found out he died, I could only think of Nietsche’s quote and wonder.

The music was used beautifully for the Joker as well. The first track on the soundtrack, “Why So Serious?” sounds like metallic bees buzzing by your ears or feedback from speakers. And it was perfect as Joker’s theme. Anytime the Joker was about to bring chaos, this theme would start building up. It’s borderline music and noise, just like the Joker—nearly illogical. 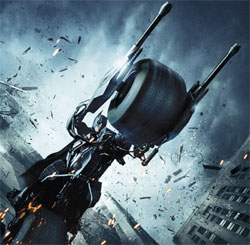 I wouldn’t be a geek if I didn’t go into the cool gadgets introduced in this movie. Here were my two gadget favorites.

The Batmobile A.K.A. Tumbler gets an upgrade—or should I say a weight-loss program. After sustaining catastrophic damage from a bazooka, no less, one portion of the tumbler disbands and it’s the Batpod! I knew of the Batpod from the trailers and previews, but I had no idea it would emerge from the Tumbler! Batman had some nice tricks on using it as well, such as riding it up a wall to do a 180 flip. Awesome.

Sonar vision using cellphones as beacons was also cool. I thought it was neat to use cellphones to transmit signals and use the transmissions to be able to get a virtual representation of 3-D space. A very cool concept that I hope remains only as movie magic. A good nod to how a bat’s vision works.

Three of a Kind?

I agree with one movie review that described “The Dark Knight” as a crime saga; the dark tone distanced it from a summer blockbuster superhero movie and elevated it into a gritty war between good and evil.

Harvey Dent said that “the night is darkest before the dawn,” which implied to me that Chris Nolan is creating a trilogy. I hope not. With the brilliance of the last two Batman movies, I would want the darkness to go on into an abyss—a never-ending series of great Batman movies.