I remember standing at a Radio Shack and admired a simple-looking fellow in a dungeon on a computer monitor. I pushed a few buttons on the keyboard and got the man to move about, and eventually jump.

I was amazed at the fluid movement animation that even had inertia. I made my way through the dungeon and came across another man, who came at me with a sword. The other man proceeded to kill my avatar and I figured out that I needed a sword for my character—who turned out to be a prince.

The first Prince of Persia was one of the games that captured my early video game imagination. It was simple in concept, great in design, and a compelling story to boot. Jordan Mechner took a formulaic story of a prince trapped in a dungeon who was trying to save a princess and gave me a nostalgic series that has me anticipating the upcoming game of the same name.

In the original Prince of Persia (which I’ll refer to as Prince of Persia 1), the prince had one hour to get out of the dungeon and defeat the evil Vizier, who was intent on marrying the princess himself if the prince did not save her. Though clich&#233, you can’t go wrong with a story that involved saving a beautiful princess. 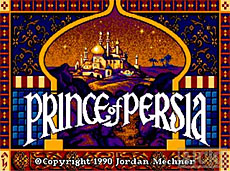 Prince of Persia 1 was a side-scrolling platformer, similar to the Mario Bros. However, the themes were more mature, with traps that would impale and slice the prince in two. Each level consisted mainly jumps, pressure-sensitive floor panels, falling floors, traps, and sword fighting. The traps and jumps would become more intricate at later levels, taking what you’ve done and adapting it to a new arrangement. For example, some of the fights required you to kill your adversary on a pressure plate so that the door you needed to get through would stay open.

I had three memorable moments from the first Prince of Persia game. The first was when the prince had to drink a green potion that would slow down everything so that he could drop down from a high ledge to the end of the level. Then there was the dungeon guard who would not advance unless you did and almost mimicked all your actions. And last, but not least, jumping through a magical mirror which created a shadow version of yourself—which you had to cleverly defeat later in the game.

I have to give props to my brother who was obsessed with beating Prince of Persia 1 in the shortest amount of time possible. I remember him showing me the shortcuts he took to beat the game in around 30 minutes. I was a scrapper and had to find all the magical potions that would increase my health so that I would have a better chance of beating the Vizier.

Jack had always admired that Prince of Persia 1 could fit on a 720 kilobyte 3.5″ floppy disk (yeah, one of those old antiques!). I have to agree that it was an amazing game for a small package. While I was the one with the initial interest, Jack took it to the next level. When the sequel was announced, we were both excited to continue to sharing in the prince’s adventures, which included, of course, saving beautiful princesses. Even if they were just pixels.

Prince of Persia 2: The Shadow and the Flame 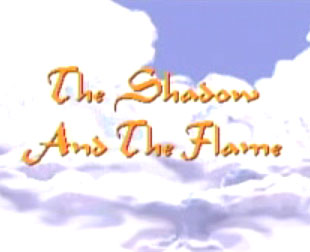 I remember picking up this game at an Office Depot with Jack and my dad. After an intriguing introduction that told what happened after the end of the first game—the prince and princess get married and lived happily ever after for eleven days—the prince smashed out of a window and we were immediately in battle.

Jack took the reigns on Prince of Persia 2. I sat beside him and offered tips and hints like a backseat driver. On occasion, I took control of the game and played a bit, but most of the game was played by Jack. The second game had an intriguing storyline which revealed the prince’s royal bloodline. I was very impressed by the story. It gave the prince a motive and purpose with an essence of mystery.

The game locations had much more variety; from a tropical island, ruins of a city, and of course, back to the palace to fight the returning villain. The gameplay had been improved as well with more combat options and also taking on multiple enemies at the same time. And the traps were more diabolical in their ways of slaughtering the prince.

There were two gameplay moments about Prince of Persia 2 that made it stood out.

First, it was carrying the concept of the shadow from the first game. I can’t remember if it was used anywhere else in Prince of Persia 2, but at one area in the game, there was a riddle on a wall that said:

“He Who Should Steal The Flame Must Die.” 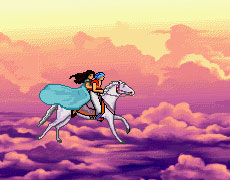 That puzzle took a while to get through. It wasn’t until we accidentally got killed by the last guard of the flame and left the game running afterwards that we got it. When the prince died, the shadow appeared, and it was able to earn the power of the flame. Then the flame-powered shadow returned to the prince’s dead body and revived him. The riddle then made sense and we had an “eureka” moment.

The second gameplay moment, which will probably bring back bitter memories for Jack, was defeating the end game boss. Jack and I tried our best to defeat the vizier with the sword but he was either immune to the sword or he had too much health. We were stuck for a while until I accidentally discovered how to bring out the shadow flame. After which, I landed a lucky shot at the vizier and stole the victory fight from my brother, who had worked very hard throughout the whole game to reach. Sorry Jack!

Prince of Persia: The Sands of Time 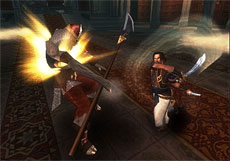 When the series got a reboot, I wasn’t in the mood to play Prince of Persia: The Sands of Time (which I’ll denote as SoT from here on out). I read the glowing reviews, and even noticed that it won several game awards. I was happy that the series was still popular.

It wasn’t until Jenni’s brother moved to New York for a job programming games that I got a chance to play SoT. He had bought it, played it, and left it behind along with several other games. From the introduction, the production values and presentation were impressive. The prince narrated throughout the game through as if was telling a story of his adventures. It even carried as far as when the player died, the prince would say “No, no, no, that wasn’t how it happened…” 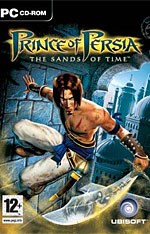 The sword fighting got more intense in this iteration, with more acrobatic combos such as running on walls, jumping off enemies, and a great gameplay trick using the dagger of time which could “rewind time.” So basically, if I missed a jump, instead of starting the level over, or loading a recent save game, I could hold down a button, and I’d rewind the game to a safe point. It was a clever game mechanic that integrated the game’s theme of time.

The puzzles were more elaborate with the additional traps the prince had to avoid. I remember spending a lot of time in the library room trying to get all the mirrors to redirect a beam of light to a specific wall to provide me access to the prize beyond. Each puzzle would open up a path to yet another puzzle, each having me redirect a mirror in some direction.

I’m glad I got the chance to play SoT and saw what all the commotion was about. It was an epic and cinematic game.

So all my backstory was to lead up to the new Prince of Persia game, which is due out on December. When I first saw the announcement, I was only mildly intrigued. But after looking the art direction they’ve taken the game, I was enamored. I’m very thankful that not all games strive for photorealism. 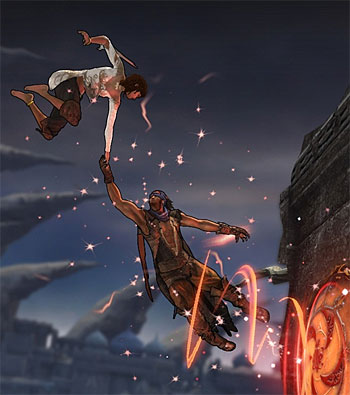 The new art style is described as illustrative. The game looks like a moving painting. The landscapes are reminiscent of oil fantasy paintings. I suppose my admiration of art lends to my appreciation of the art direction.

The trailers they’ve created have impressed me as well. They have scaled back the combat to focus much more on one-on-one fights, giving each one a cinematic feel. I believe making each enemy more significant personalizes the battles more than fighting the horde. It reminds me of two other games that executed this well: Jedi Knight 2’s boss battles and Shadow of the Colossus (which I never played).

Players will be assuming the role of a new prince than any of the previous games. He will also be accompanied by a princess, Elika. I like this new relationship, rather than having the prince save the damsel in distress, we have a powerful princess who helps the prince defeat the armies of darkness. They both have their role and work together in the battles. The prince unleashes powerful physical attacks with his sword while Elika uses magic to supplement.

I couldn’t quite pinpoint what about their combination attacks was so attractive. The fights were almost like dances, with a dramatic ebb and flow. Granted, trailers put together the best scenes along with choreographed music to evoke emotions, but it still looked good. Eventually, when I showed the trailer to Jenni and attempted to describe it to her, I found the word to best describe the game: romantic. Not an adjective I’ve seen used to describe any other game, but it definitely fits this one.

My hopes are that the newest Prince of Persia game will be as much fun to play as it is to watch. And if it isn’t, well, I’ve got the nostalgia to compensate for it.

One reply on “Prince of Persia”

Great post! I first played PoP on my SNES if I recall correctly and chugged away at it relentlessly until I beat it. Sadly, World of Warcraft and the Navy resulted in my never playing any of the newer iterations, though I heard they were amazing.