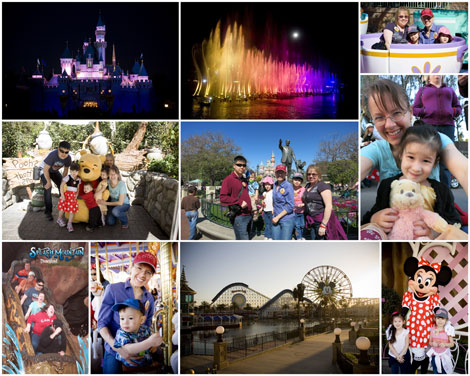 A rite of passage for every child and every parent, we embarked on our first journey to the happiest place on Earth with our kids and Tracy. I have not returned to Disneyland in over twenty-five years, so I wasn’t sure what to expect. In retrospect, the experience was best captured on a plaque near the entrance:

“Here you leave today and enter the world of

Tracy and the Scooter

We invited Tracy to join us to help us match the number of adults and children. She’s practically family and we enjoy sharing adventures with her. She also brought along an unintentional perk in the form of a scooter, which allowed us to bypass many lines for rides by using the wheelchair-access entrances. It was a huge time-saver for popular rides and airport security waiting lines.

She helped us plan out our visits in Disneyland and California Adventures while we took care of the kids. She researched rides and attractions appropriate for our young kids and developed a game plan to maximize our time there. We were so thankful that she came and blessed us with her love and time.

Since we brought three children, dietary restrictions, and physical health limitations, we had interesting logistics to improvise at Disneyland (for my own reference when—not if—we go again):

Bringing the Virtual to Life

What I appreciated most of the experience was the great length Disney has gone to bring their characters into our world. Our first contact with the characters is usually our visit to their world, whether it is in the form of a movie, book, toy, or song. Disneyland provides a connection point for anyone to come into contact with the sights, sounds, touch, smells, and tastes of their imagination. For a child, it is magical to exist somewhere they’ve only imagined.

It also made me wish that a place of equal creativity, care, and love could be crafted for Jesus—a place that anyone could come and make a real-world connection with Him so He is not so abstract. A place to celebrate someone who went to great length to bring his people to life. Now, that’s where I would call the happiest place on Earth. Perhaps, that place already does exist, it’s just that the rite of passage is just a one-way ticket. But, if it is truly the happiest place, why would we ever want to come back?

See our photos from Disneyland »