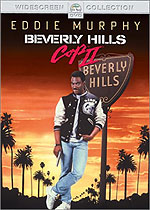 Starting off our 80’s movie month, Jenni wanted to watch the movie Beverly Hills Cop 2 since she’s played the theme song Axel F in band but had never seen the movie.

I remember watching the movie in days long past and admired how Eddie Murphy’s character could get away with almost anything by over-talking his opponent. I don’t admire it so much now that I’m older and wiser, but it’s still fun to see someone smooth-talk in their element.

My favorite moment in the movie comes toward the end. Billy loads up with a ton of guns from his car trunk as they head toward the criminals’ headquarters. They snuck around to a truck and found it stocked with weapons.

Taggart jokingly holds up a rocket to Billy and teased, “Hey Billy! You don’t have one of these.”

Billy then proceeds to load a few rockets in his trench coat pockets and slung a rocket launcher over his shoulder. Reminds me of video game shooters—one person carrying a whole army of weapons without any regards to weight and blasting away with an assortment of firepower.

We watched the movie with our friend Mary and had funny side comments about how the vision of physical beauty and style has changed in two decades. Jenni and I also noticed how director’s techniques have improved in storytelling and how far we’ve come in special effects.

Special thanks goes to my brother Jack for finding our old VHS recording of the show at my parents’ house; not only saving us money, a trip to the video store, but also since it was on TV, all the swear words were replaced.