What a fantastic week it’s been! Backing up to a couple of Fridays ago, it was fun seeing The Lion, The Witch, And The Wardrobe with Ullas and Rex. We stood in line to get in on opening night…oooo. It was a cute movie. The animals were really neat looking.

Saturday, we went to the Board of Directors meeting before the dance, ate steak at Shari’s with some of the new board members, and then danced till late. It was nice seeing Tovah once more before she headed back to San Diego. 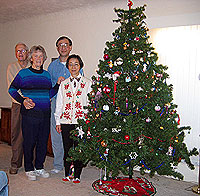 Sunday, we went to my grandparents’ for lunch with David’s parents. We ate steak, decorated their tree, played their player piano, Gram’s concertina, and air hockey. Then we zipped back to Beaverton for evening church service. It was packed! All the parents and grandmas probably wanted to see their cute kids sing in the children’s choir. A really good singer from Honolulu sang a mini concert as well.

So now we get to Monday, a much anticipated day. I started by seeing Kellie who put a bunch of ribs in place in my back. Felt so good! I can breathe again! Then I met Cory at Jantzen Beach to help him Christmas shop. He came down from Bellingham so he could meet Travis at the airport with the rest of us.

The plan was to hang out at Rex’s till we’d go to the airport to meet the 10:45pm arrival. But there happened to be Bunco at Jessica’s that night, so David brought me there to visit with all the ladies. We opened the door to a bunch of surprised faces saying, “It’s Jenni!… and the husband!” It was so nice to see all my childhood friends, their kids, and their moms (including mine) and sisters and grandmas again. This group of ladies from Fellowship Bible Church started the Bunco club back when my friends and I were babies. What a fun tradition to carry on through the generations. David visited with Nathan, and we played with all the little kids running around the house. Little Andrew was using his sister as a sled down their stairs until she got hurt. And their toddler brother enjoyed stabbing at them with a toy knife until I secretly handed it off to David while I gave him a slide ride down my legs. Funny kids!

We left the chaos to go to the airport. As Travis’ plane emptied, it felt like forever until we recognized him coming through the security gate. We all shed a few tears as we hugged and welcomed him home. I was so glad to know he was here at last! We went to Shari’s again. Travis shared some fun stories of his adventures in getting home with all his stuff that weighed too much for the plane trip out of London. His friends gave him tips like: your carry on could be as heavy as you want. And there were no rules on how much clothes you could wear. So he was wearing a bunch of clothes, feeling so uncomfortable because of wearing several shorts, cakis and jeans; probably sweating, poor guy, and then he got patted down! Apparently the rules weren’t so strict coming from Texas because he was sporting some Euro-trash jeans with rips and fade marks, that fit more snug than his “Hammer pants” he usually wears. We left Shari’s and got home around 1am.

Tuesday, after Bible study and a Christmas luncheon I met David in downtown for a date at OMSI. His company had their Christmas party at a restaurant. The employees were given their Christmas bonuses as well as the afternoon off to shop in downtown. We went through the animation displays in OMSI and had a lot of fun recording ourselves on video, and recording our voices on cartoon segments. Even more exciting for me was that I had recently watched the first three Harry Potter movies the last couple of weeks, and was hoping I could see the fourth one. Low and behold! It was showing in the Omnimax theater! What a huge screen! I had to turn my head to watch the train travel across it.

Went dancing Wednesday. There was quite the crowd there to give Leah DeForest a send off party. We’ll definitely miss her.

Thursday, my father-in-law took me as his guest to his work party. 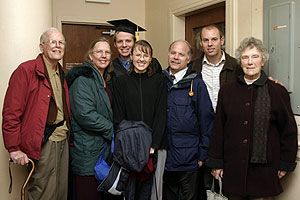 Friday, was Rex’s graduation from the Art Institute of Portland. We toured the displays throughout his school, watched his ceremony, and then hit Rock Bottom Brewery. Yum! Trav, mom, dad, and gram, and gramps all came, too. We then went to Rex’s apartment for a while before going to the free Christmas dance. That party was packed! Got to see Tracy, and Sandi. Yay!

Saturday, we decided to stay home to get things done. We ended up getting a new computer desk and chair. There was no way we could get the desk up our stairs without getting hurt. Finally we got the idea to open up the box and take it in a piece at a time. David worked on it a while, and then we watched Mr. and Mrs. Smith. We were pleasantly surprised at the humor in it, and had fun imagining a Mr. and Mrs. Lim version.

David got the desk all set up by Sunday morning. After church we were going to head to Oregon City to meet some friends but it started snowing with freezing rain in parts. So we finished up some more shopping and headed home.

Monday, my parents came for dinner.

Today, Jack should be arriving if not already here.