Jennilyn and I had been dreaming of going to China since we’ve been married. I had an opportunity to visit China with my family in 2005, but I declined because Jennilyn had returned from Japan fairly ill. While I had no regrets in staying behind while my brother and parents had a great time in China, I looked forward to the day I would return to China. 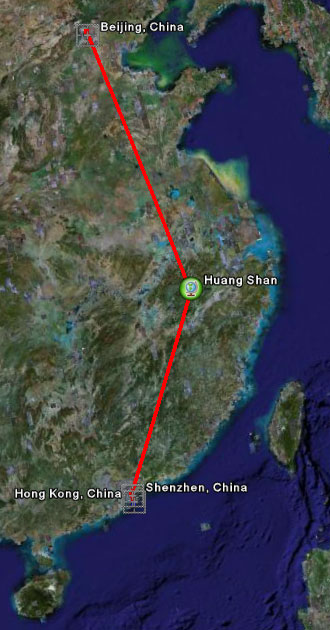 Shortly after Thanksgiving last year, Jenni and I visited my parents on a spur of the moment. We got to talking about the upcoming year and my parents mentioned that they considered going to China in the spring. They wanted to climb Huangshan before they got too old and still had the physical health to do so.

Then they said that they might not go to China because some relatives considered visited the United States around the spring. I jumped at the opportunity and told them to forget the relatives and go to China. And if they did, we would love to go with them!

Their eyes perked up, and a dream took a step toward reality. In the following months, my mom and dad made many arrangements, with some input from Jenni and I, about what we would we all like to do while we’re in China. Jenni and I were excited to see some of the relatives that couldn’t make it to our wedding, but also see the wonders and culture of China. From what my parents told us about Huangshan, we were very excited to climb the mountains where we would see the clouds wash upon the mountain tops like ocean waves.

I’ll go in depth about each location in future blog posts. Visiting China was a once-in-a-lifetime experience, and I’m very thankful to been able to share it with Jennilyn and my parents.