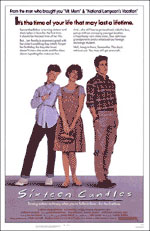 It’s not the worst movie we’ve ever seen, but the first thing that bothered us was rating the movie received. On the box, it said the movie was “PG,” but in the first five minutes of the movie, we were greeted with a word that was definitely not “PG.” And if the language wasn’t enough, we were flashed in a shower scene in the girls’ locker room shortly after too. I guess the movie ratings have gotten stricter in the last two decades, but I would think the ratings would’ve loosened rather than get stricter. I remember when the “B” word was acceptable on television, and then all the shows capitalized on the newfound freedom.

We shared a few laughs through the movie. The Chinese exchange student was a welcomed character as we recognized him as the Karate instructor from “UHF.” Watching the stereotype of nerds lacking social skills wasn’t too far off from the truth.

I believe the best part was the scene between the father and his daughter. He sensed that she was bothered by something and comforted her like a good father should. I guess now that I’m a dad, I better appreciate the effort he made to connect with her and be real with her.

I really enjoyed Joan Cusak as the geeky girl with major headgear. She couldn’t turn her head and so her huge expressive eyes would stare over and then her whole upper body would follow. Her attempt to drink from the fountain during the dance cracked me up – especially at how she used her sweater. It had a picture of a girl in a nice dress (funny that she wasn’t wearing a dress herself) and the skirt part was a piece of fabric attached at the waist. So after getting her face wet from the drinking fountain, Joan lifted the skirt to wipe her mouth, and revealed the petticoat clad legs of the girl on her sweater.

“Farmer Ted” is the absolute best part of that movie. But yes, the standards for rating systems have changed significantly since we were kids.