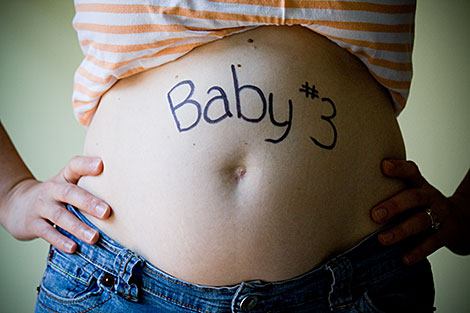 Funny thing; life. Back in April, the night before David left for his trip across the world, I took a pregnancy test just to make sure my suspicions were false. It came out negative. David left, and I went to my mom and dad’s for a week. After several days of feeling nauseated, I took another test: positive! I wish I could say my first reaction was “Yay!” But I had been on a drug regime for Candida and parasites. So I think my first utterance was “Oh crap.”

I walked to the kitchen and numbly handed my test to my mom, who cried with me. My dad comforted me and said “But you make cute babies.”

I wanted to tell David first, of course, but he had very little internet access in Mauritius. So I wrote him an email. I was so anxious to know what he thought. We had talked about maybe having a third child but my plan was to get healthier first. I checked my email over and over again for two very long days before I got a response. He was quite in shock as well, and said something about getting a minivan after all.

Soon, we were able to Skype for a couple of minutes. We both sounded like robots, and had choppy or frozen pictures of each other, but it was such a relief just to see him smile at me. I felt like I could make it after that.

A few days later I was able to talk to my doctor and he said that any affects of what I was taking would have prevented or aborted the pregnancy, and since neither had happened, I shouldn’t need to worry. Needless to say, I stopped the drugs immediately.

The following couple of weeks were filled with tremendous help from a bunch of friends who came over to cook, clean, and help with with the girls. I was so tired, I’d often lay on the floor while the girls played around me when we were on our own. It was difficult to feed them, much less myself, when I was so nauseated all the time. But I forced myself to eat whenever they ate because I had learned by the first two pregnancies that an empty stomach meant feeling even more sick. I won’t go into much more pregnancy woes but to say that I’ve been losing weight and not getting much sleep because I’ve been too sick to eat, and too low of blood sugar to sleep. I cannot believe how much I hate food, but need it so badly.

I was very relieved when David came home! And I am relieved to find my nausea has diminished a bit over this last week. I still hate chicken and rice, but I am able to eat it while distracted with a movie or something.

I am happy to have another baby, but I’m glad to have the nine months to get used to the idea. David and I rest in the fact that God’s timing is better than our own, and we are thankful for that. I’m glad the kids will all be pretty close together in age. I’m also enjoying my heightened sense of smell at times like during my walk around the neighborhood last night. It was as if God had perfumed the air with everybody’s flowers. It smelled so incredible!

Today was kind of a bummer when our car stalled on us twice while trying to get home from farmer’s market. We take it as a sign that it really is time to get that minivan.