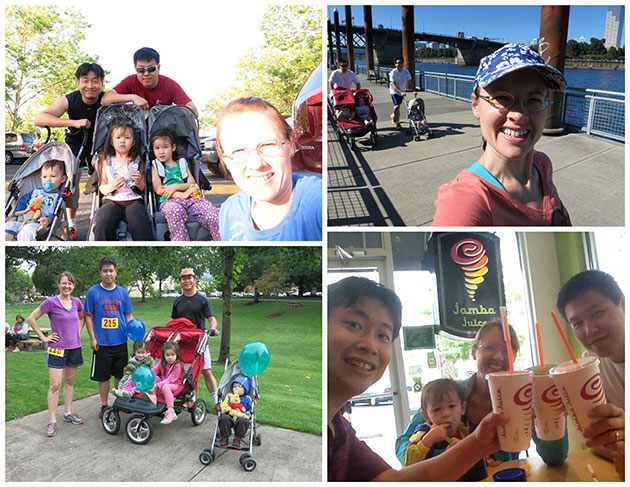 In March, on a routine Monday night get-together, Jack and Jenni exercised in the workout room nearby while I put the kids to bed. When they returned, Jenni excitedly shared that she felt well enough to run. It had been several years since she ran and it was an exciting development. She was getting stronger.

The idea of joining a 5K was mentioned in the months to follow that culminated in, not only Jenni doing a 5K, but doing a 5K with Jack. Then it snowballed to include me. Then all three of us with the kids in strollers. Yup, as if running 5K wasn’t challenging enough, we’ll throw in an extra fifty pounds to push.

We signed up for the Four Their Lives 5K race out in Troutdale, where the proceeds were for Portland’s first mobile ultrasound. However, on the week of the race, we relocated when we found a 5K race in Beaverton that started later in the morning. The Troutdale race started at 7:15am, and it was too early to get ourselves there with our kids. The Beaverton Fun Run started at 9:00am and allowed us more sleep before running.

My brother Jack commemorated the race together with a dinosaur hat that entertained our girls and fellow runners. If I had known, I would’ve worn a special hat. We started the race with Jenni pushing Bruce in an umbrella stroller, Jack prancing like a dinosaur, and I pushed our two girls in a borrowed double jogger stroller. I made a new personal best pushing the stroller over a mile before turning it over to Jack for the remainder of the race. I was also able to run through the entire race without stopping or walking. The most I had ever run in my life was one mile during high school. I’m thankful that I can run more now than when I was younger.

One funny memory from the race was a couple who ran ahead of us. They heard the squeak from the double stroller’s wheels and picked up their pace to stay ahead of us. They ran for a while, then walked, and as we caught up, they ran again. This went on for a while. Jenni and I both noticed the pattern and came to the same conclusion: we’d run past them as we got closer to the finish line and beat them.

But before we made them eat our dust, they got tired and didn’t try to stay ahead. My brother, who had run a half-marathon before and runs regularly, pushed the double stroller by, and sincerely encouraged them. The guy turned to the gal walking next to him, and said with a sense of irony, “The guy pushing a double stroller is encouraging us to keep going!”

So where to now? I hate to admit it, but training regime was a great bonding experience for Jenni, Jack, and I. We had fun researching running paths and learned more about our neighborhood. We trained once along the Portland downtown waterfront and Eastbank Esplanade on a gorgeous day and enjoyed the view of the river.

The question I am asked if we’ll do another one. I don’t know for sure. I’ve enjoyed the health benefits and comrade. And it was a good reminder why I married Jenni: she makes me want to be a better version of myself.

See photos from our 5K training and race »