Val once told me that Marco said that you’re not the same dancer after a dance convention. I wholeheartedly agree. I think that anyone who spends an entire weekend reuniting with friends, learning more about their craft, being inspired by champion dancers, and dancing with people from all around would hardly remain the same dancer. Then, if you compete, you’re also spending the weekend looking for partners for strictly swing, dancing with other people around your level for Jack and Jills, changing outfits each round of competition, dancing until the sun comes up, and wondering if you’ll be awake for work the next week. How can anyone stay the same?

BridgeTown was a great personal experience for Jennilyn and me this year, which I’ve already talked at lengths about. There were many elements that I didn’t get to touch on that I thought I’d record them here.

I was pretty jittery with excitement leading up to BridgeTown. I hadn’t been to a dance convention since BridgeTown 2004, so it had been a full year. My brother Jack had also timed his biannual visit to the family on the week so I was excited to share BridgeTown with him and Jenni.

BridgeTown was also different because I wasn’t on staff like I had been the previous two years. It was a really odd feeling, like stepping into your high school after you’ve long graduated, being familiar yet foreign. I had to try really hard not to get involved because I was to experience the convention from the other side.

I did help out prior by creating the programs, and unlike last year, we didn’t get a small mini version that was by mistake but happened to be a hit. It was just a standard program. With an error. I found out after initially distributing the program that a very important person, the M.C. Grace, had gone through a divorce, and I wasn’t informed of her name change. So, since she is an essential person to the atmosphere of BridgeTown, there was a moment of panic to fix the program. Luckily, I was able to make the correction onsite and got them reprinted at a nearby Office Depot. That was probably the most stressful part of the weekend.

I think the staff did a wonderful job with the event. The pacing was very smooth, I didn’t feel like anything was behind schedule. The midnight breakfasts were delicious and exactly what I needed at 12am to keep dancing. I felt that the music was a little weak Friday night, but the rest of the weekend fared better. I thought the competition music had a good variety.

One thing I found interesting was seeing what level people had reached since I’ve been M.I.A. from conventions. There were some leads who I competed against in novice level two years ago in advanced, but also follows who I’ve danced with in novice who were still in novice. For those still in novice, I’m glad they don’t let their placement (or there lack of) get to them. There are some wonderful follows still in novice level that I look forward to cheering them on when they get their chance to win.

After the awards ceremony, Clark Wachsmuth got a great group shot of everyone. It’s been great getting group shots the past few years, and they keep getting better. Here is the group shots from 2003 to 2005. 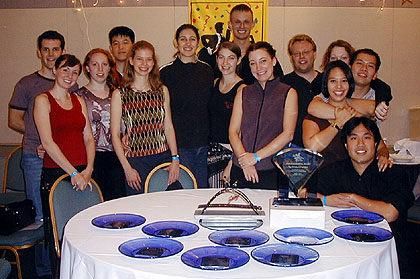 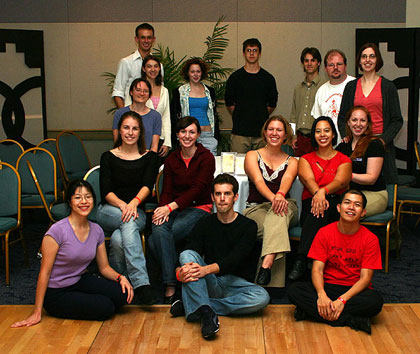 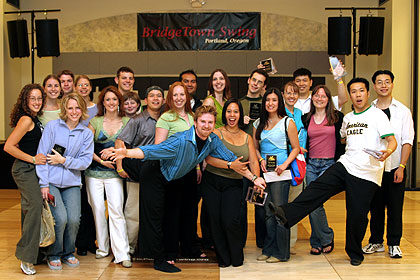 What I really treasured was that we all got to go out to dinner afterwards. My parents came out since it was Jack’s last evening in Portland before going back to Pittsburgh and joined all our dancing friends. I loved having everyone at the table, sharing good times, enjoying friendships, and eating great chinese food. Props to Trina for ordering the Peking Duck.

Time with people has become more precious to me as I’ve gotten wiser older. Back in college, it felt like the people will always be there. My good friend Marco will soon be moving away to Australia to continue his studies in art. I’m very glad that he has been able to stay longer to attend BridgeTown. He has helped me grow as dancer more than I can thank him. I hope for him great happiness in his future endeavors.