Rachel and I figured out we’ve known each other for 11 years now – since before her first son out of three was born. Now that she’s moved to Montana, married a great guy, and has a daughter, it was time for a visit.

I took off on Memorial Day to spend the week with them, and David followed after on Thursday. Catching up wasn’t too hard since we talk for an hour or two on the phone every week anyways. But it was nice to be able to turn and look at her as we chatted away—very nice.

Rachel is a midwife/doula and so it was neat getting her perspective on things, and seeing how she takes care of her two month old daughter, Naomi. It was really neat when Rachel felt around my belly and told me where the head and body of my baby was. She gave us a great book on the birth partner, as David will be my birth partner in about 3 months from now.

We watched the first two Pirates of the Caribbean movies to get ready for the third, which we got to see at a drive-in theater. It was perfect because Naomi could sleep on the back seat, and Rachel could feed her and change her easily. I’m not sure what I think of the movie. A lot of it was bizzare. Some of it was funny. And I think I’ll have to rent it sometime to see if I really like it or not. 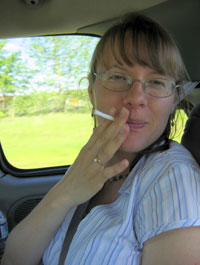 The day before we came home, we went to Red Lodge to eat and travel around the mountain pass that runs down into Wyoming (Shoshone, I believe). A surprising number of people were out snowboarding on the remaining glaciers. The lakes were still solidly frozen, but pretty. We stopped at a cool candy shop that had all kinds of fun candy I hadn’t seen in a while, like candy cigarettes! I had fun memories of eating those, feeling naughty and rebellious. I also remember them tasting a little better than they do. Ah well, it’s fun to play anyway.

Besides playing a little Lego Star Wars II with the boys, a game of Sculptivity with the family, eating and getting to know each other better, we did a photo shoot one day. Rachel, a photographer herself, really appreciated getting to be in the photos rather than being the one behind the camera.

I wish we lived closer to each other, but our visit was a wonderful one, and I look forward to seeing the boys again when they come to Washington this summer.

View pictures of Brian, Rachel and family, and Montana.