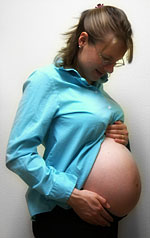 Since we are waiting to find out if we’re having a boy or girl, everyone asks what we think it will be. I go back and forth on this one. According to the Ancient Chinese Birth Gender Predictor, we will be having a girl. But my in-laws, who are Chinese, say I will be having a boy. In fact, most everyone I meet, including strangers, say I’m having a boy.

At first I was a bit offended because I really want to be surprised. I once asked my physical therapist if it was wrong to want to have a girl just to spite everyone who tells me I’m having a boy. I never really asked for their opinion in the fist place! David has helped me calm down a bit, for he says that we’ve given them something to do, and that it’s fun to guess. He’s right. They’re not trying to aggravate me, but I have to say I’ve really appreciated my friends who don’t give me their prediction and just share the fun anticipation along with me.

I’ve been glancing over some Old Wives’ Tales for predicting the sex of an unborn baby, and it still makes me go back and forth on what I think I’m having. According to my belly shape and position, I have the beach ball that sits low versus the high-sitting watermelon, which should mean I’ll be having a boy. For cravings, I prefer sweets over pickles and meat, which means I’ll have a girl. Our baby’s heart rate is over 139, and my morning sickness, I think, was mild (I don’t know how to really compare yet since I’ve only experienced pregnancy once so far), which are signs of having a boy. My dreams are mostly filled with boys, so that means I will be having a girl. I sleep on both the left (boy) and right (girl) side, so that doesn’t help me chose.

My childbirth teacher, a doula, has told our class that most of the time she’s seen the women who are having girls gain weight everywhere, with a widened torso etc., and the women having boys carry it all in front so that they don’t really look pregnant from behind. While I still have somewhat of a waist, oddly, my wedding ring, dance shoes, and underpants have all shrunk.

Also, I usually have dreams about having a son, but the other morning I awoke from a dream where I had a daughter. So… while it’s still fun to sway back and forth, if I had to chose what gender I think I’m having, at this point I’ll be pretty surprised if I have a girl.